Cam Chapman grew up in Seattle, Washington.
There as a young sports photographer who deftly
immortalized racing machines, he discovered

In 1979, he moved to Chicago to launch his
commercial business, Cam Chapman Photography, Inc.
For more than 25 years, Cam's photos have defined

the etherial elegance of motion, the unique art hiding

in the most mundane advertising object.

His commercial images have influenced consumers

worldwide. Cam's work has been featured on

​​​Working before the days of photoshop, Cam had only a single sheet of film- just one shot, to capture the magic that would be the cornerstone of ad campaigns for companies like Coca Cola, Quaker Oats, Nike shoes, Firestone Tires, Allstate Insurance and Lockheed. Not only did this require the highest level of skill in lighting and photography, but

also in set design.  Cam is a master at building sets, jigs, and complex contraptions to allow synchronization of

multiple events to occur at precisely the right moment. His specialty was stop-motion photography of liquids and

gasses. Capturing the perfect splash of milk from a strawberry dropping into a bowl of cereal, or the explosion of

competition.  Art directors from all over the country would travel to Cam's studio in Chicago specifically for his

expertise in this area.

His innate ability to conceptualize, build elements, and manipulate a subject have been recognized with awards by

Communication Arts, Print Regional Design Annual, and The Art Director's Club of New York. His expertise as a

Invitational. He is a published contributor for Electronic Step-By-Step Magazine, and the developer of Rotate My

And apparently, he has a personal relationship with LIGHT. Cam Says he " first feels it rising", then "hears it

arriving", and he gently invites it to his composition, willing it to "perform".

His work shines with this instinct. 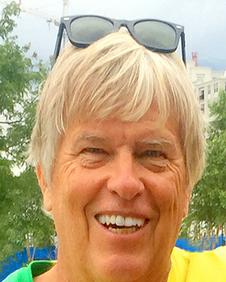